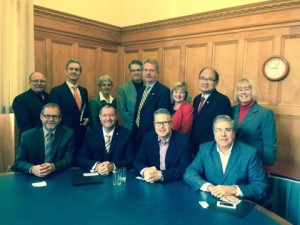 On October 30, 2015, members of the Board of the BC Association of Broadcasters were in Victoria to meet with several MLA’s to bring them up to speed on what your BCAB is up to. This was the first such meeting of the BCAB and MLA’s in quite some time. The BCAB Board provided the following information:

The British Columbia Association of Broadcasters is a member based organization comprised of 73 private Radio stations and 11 Television stations in BC along with 22 Associate members related to our industry.

BCAB – There for its Members

BCAB – There for Our Communities

Thank you to the British Columbia Government Caucus members for the opportunity to present an update of our activities. We encourage caucus members to reach out to the BCAB for more information about our organization, its members and how we can be a part of the provincial communication strategy.