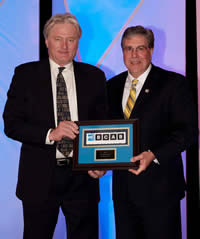 The British Columbia Association of Broadcasters (BCAB) has presented its 2013 Humanitarian Award to the BC Epilepsy Society.

“The Humanitarian Award is just one of the many ways Broadcasters of British Columbia give back to the communities and cities they live and work in,” says James Stuart, BCAB president. “We chose the BC Epilepsy Society this year because of the educational challenge they face regarding appropriate epileptic seizure first aid.”

Stuart says the society’s goal and mandate to educate the public on this issue is of paramount importance and notes BCAB members are in a great position to help out.  “With the full provincial coverage this award brings, their message will be broadcast to all British Columbians,” he says.

Beginning in July virtually every private TV and radio station will run a full 52 week advertising schedule for the society valued at over one million dollars, ensuring significant exposure throughout the province.

“The staff and volunteers of the BC epilepsy Society are very proud to be receiving this award, but more importantly the message that broadcasters across BC will be airing will help dispel the myth about correct and incorrect seizure first aid,” says Shawn Laari, Executive Director for the society.

Laari says for many people it’s frustrating to see a lack of accurate and appropriate portrayals of epilepsy in popular culture. “The exposure this award will give us is critical because for many years, popular culture and many television shows in particular, have been perpetuating the incorrect message of seizure first aid.”

On July 1st, BC’s broadcasters will begin airing a message called “You can’t swallow your tongue!” which focuses on appropriate seizure first aid.

“We know that broadcasting this public service announcement will help so many British Columbians with epilepsy when people around them can administer first aid the right way,” Laari says.

Laari also notes that being acknowledged by a highly credible partner like the BCAB gives his organization the testimonial they need to positively influence the outcome when approaching other organizations for financial or service support.

The British Columbia Association of Broadcasters represents private television and radio broadcasters with the mandate to combine the resources and strength of our industry in three key areas: to promote and contribute to community enhancing programs throughout our province, to present a unified and credible voice in matters that affect our growing industry, and to provide our members with information and inspiration through our annual BCAB Conference.